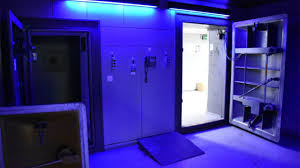 Seven suspects were arrested in a series of raids in Traben-Trarbach (Rhineland-Palatinate) on Thursday, police said. About 200 servers were secured as well as many disks, mobile phones and “a larger sum of cash,” according to the police.

The seven people arrested – four Dutch, two Germans and a Bulgarian – were detained on remand.

Prosecutor Juergen Brauer told reporters that including the seven arrests, a total of thirteen people aged 20 to 59 under investigation. The charges against them include being members of a criminal organisation, tax avoidance, and “hundreds of thousands of offenses involving drugs, counterfeit money and forged documents, and accessories to the distribution of child pornography,” according to reporting the Associated Press.

Several hundred police officers participated in the operations in Germany, the Netherlands, Poland and Luxembourg.

The data centre is thought to have hosted several major online sites for criminal activity, including the drug dealing portal known as “Cannabis Road,” and “Wall Street Market,” another marketplace for drugs, financial theft, and hacking tools which was taken down in May. A cyber attack on Deutsche Telekom that cut off hundreds of thousands of customers from the internet in November 2016, is also suspected to have originated from the bunker.

The former NATO facility was acquired in 2013 from the Office for Geoinformation of the Bundeswehr, by a now 59-year-old Dutchman, who is the chief suspect and reportedly has ties to organised crime in the Netherlands. The bunker, set on 13-hectares of land, has five stories of underground floor space totalling 5,500 square meters, as well as two adjacent office buildings with a total floor space of 4,300 square meters, according to data center dynamics.

President of the Rheinland-Pflaz State Office of Criminal Investigation Johannes Kunz said. “I think it’s a huge success… that we were able at all to get police forces into the bunker complex, which is still secured at the highest military level.”

“We had to overcome not only real, or analog, protections; we also cracked the digital protections of the data centre,” Kunz added.

Koblenz Attorney General, Jürgen Brauer, emphasized the significance of the police operation on Friday saying: “It is the first time in Germany that [action has been taken not just against] operators of shops or marketplaces, but against those who make the crime possible.”